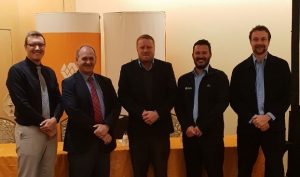 Solidarity today requested Parliament in a petition to call a debate on South African Airways (SAA) in the National Assembly. Solidarity called on government to join it in its application for business rescue for the airline and requested that the bailouts that are persistently being granted to the carrier and that each time lead to nothing, be ceased.

This comes after a report by the Solidarity Research Institute (SRI) on the state of the SAA was announced in Cape Town today. The report finds that there is no choice but to place SAA under business rescue.

The report points out that, among other things, the SAA has not heeded the major changes that have taken place in the aviation industry since 2013. This mismanagement has resulted in a hugely loss-making airline that has received endless bailouts just so as to remain in business in an inefficient way. The SRI report identifies the strategic imperatives that must be followed to turn SAA around and to make it profitable. The report also shows that the SAA cannot achieve this without external intervention.

Solidarity will serve papers on the SAA within the next two weeks in which the court is approached to place SAA under business rescue. Solidarity also requested the Minister of Finance to join Solidarity in asking the court for a preferential date to deal with this matter expeditiously so certainty about the SAA can be achieved more speedily.

The report furthermore states that government as sole shareholder is the constant factor in SAA’s failure. The extent of government’s negligence as a shareholder is proven by the fact that the SAA Board adopted a resolution back in 2014 to place SAA under business rescue and to find a strategic partner. Neither of the two has been implemented.

According to SRI Head Connie Mulder, the SAA court case will be one of the most important tax protest court cases in South Africa. “If we succeed in this case, it could create a precedent for similar action at other state enterprises. Taxpayers now have the opportunity to use the course to hold government accountable,” Mulder said.