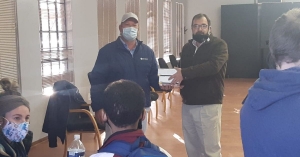 Solidarity’s staff are widely known for going out of their way for Solidarity members in the workplace. Solidarity represents approximately 140 000 members in all occupational fields, collectively and individually, and our representatives really have a passion to look after every member and to ensure that their rights in the workplace are protected. We have 17 offices countrywide and more than 300 staff members and 1 275 union representatives serving members in thousands of companies.

Put simply, Solidarity ensures that its members receive the necessary assistance to protect their jobs, and therefore their income, because your work is also our work.

Solidarity’s interests, however, go beyond merely protecting your job, and Solidarity’s staff really care for the welfare of every member and also of the community.

There are numerous examples of projects where Solidarity staff members are involved in their spare time and in their own communities, helping to build the future of our people. Solidarity’s staff members are ordinary people who take on extraordinary things. Even though they do not have hairstyles like those of super heroes, they do see the need in every community and then actively do something to relieve such need.

Joe Bruwer (43), a Solidarity representative at Assmang in Blackrock (about 80 km from Kathu in the Northern Cape), is one of those ordinary people with a huge heart for his community. Assmang is a manganese mine with a mining town (Blackrock) consisting of about 250 houses. With only one shop in the town and with neighbouring towns quite a distance away, this community has its own challenges.

This community in the heart of the Northern Cape, who generally have had their share of suffering, have also been hit hard by the complications caused by the draconian lockdown measures that have seriously hampered working South Africans and their communities.

According to Joe, the last couple of months have been a very dark time in the community and there has been much uncertainty about the future, especially about the effect the Covid-19 pandemic would have on the community. Because it is a smaller community, people did not understand why the new measures had to be applied all of a sudden. Joe immediately started working to inform the community about the coronavirus and the dangers it posed. He forwards the latest statistics to the community every day to ensure they remain informed about the spread of the virus. It was even mentioned that Joe’s good work was making such a huge difference that the information compiled by him is also used by another union to communicate to its members

During this time Joe also got involved with the local primary school, where learners who returned to the new normal and way of attending school did not have masks. Blackrock Primary School is the only school in this mining town, and there is no high school.

Joe mentions that he saw on a WhatsApp group that the Grade 6 learners of Blackrock Primary School did not have masks when they returned to school. Joe says he immediately thought of a way he could help. He decided to approach Assmang, and he was convinced that they would supply masks for the children.

When Assmang expressed their eagerness to assist by making masks available to Joe, he contacted the school principal, who by then was at a loss because he did not know what to do to get masks. According to the principal, he already had to cut the school’s budget. There were no funds available for masks for the learners and almost no assistance had been forthcoming from the department of education.

Assmang even sent a team of ER24 paramedics who ensured that a safe physical distance between learners was maintained when the masks were handed over. On arriving at the school, Joe saw that most of the learners were already wearing their own masks that they had brought from home. The principal nevertheless was relieved because the masks brought by Joe were enough to give to the rest of the learners when they return at a later stage.

Although it is a small school with fewer children than urban schools, Joe’s involvement has made a constructive contribution to his community, proving once again that even a small contribution can make a huge difference.

Asked why he wanted to get involved in this specific way, Joe’s simply replied: “Here in the Northern Cape there are people who are really struggling, and the government ignores us. There are parents sitting at home with no income. It always feels good to help someone who needs it most without having to ask. All of us have a responsibility towards other people.”

Joe is passionate about making a difference in other people’s lives, and he enjoys his work where he can ensure that people exercise their rights in the workplace and that when people fulfil their duties, they can return to their children safely at the end of their shifts.

Joe does not have children of his own, but he mentions that his wife has five children from a previous marriage whom he loves as if they were his own. He proudly says he has 13 grand-children even though he himself is not a father!

He concludes by mentioning that people should show more gratitude because we have more than we need.

We may learn much from Joe. His heart is at the right place. Let us follow his example and make a difference in our community! 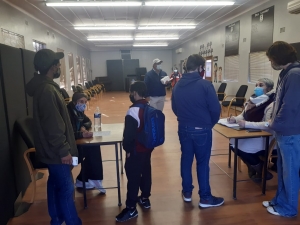 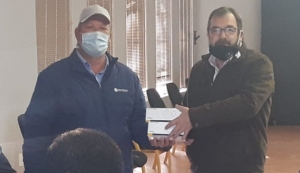