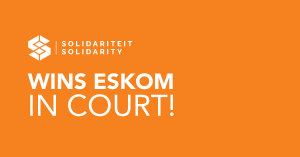 The Johannesburg Labour Court today found that the dismissal of Johan Dempers, an Eskom project manager, was unlawful.

This followed after Dempers, a project manager at the Matimba and Medupi power station, was summarily dismissed, without warning, from Eskom Rotek’s service on 18 October 2019.

“Mr Dempers and his fellow employees at public institutions are under siege. Incompetency is entrenched by making employees the scapegoat on a daily basis. We are delighted with the verdict and we won’t hesitate to proclaim Eskom’s incompetency from the rooftops,” said Anton van der Bijl, head of Solidarity’s Legal Services.

Dempers was dismissed unlawfully when Eskom Rotek claimed he had failed to deliver 1 500 tons of coal per hour to Medupi, as per instruction. According to Eskom Rotek, he also failed to report the matter to senior management.

“After 31 years of faithful service, Mr Dempers’ reward was unlawful dismissal while performing his duty effectively. He was condemned for something that was not his responsibility,” Van der Bijl said.

Van der Bijl added that the court’s ruling should be a warning to Eskom that Solidarity will not tolerate the unlawful dismissal of innocent employees, and that Solidarity’s members won’t take the blame for Eskom’s own incompetency.