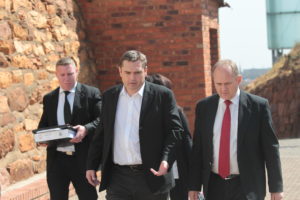 Trade union Solidarity today said emotions ran high at yesterday’s session today of the United Nations’ Committee on the Elimination of All Forms of Racial Discrimination. South Africa’s policy on affirmative action, in particular, came under the spotlight following the presentation Solidarity had made to the committee earlier this week.

According to Solidarity Chief Executive Dr Dirk Hermann, accusations that the South African government’s policy was too rigid and even amounted to old apartheid were mooted among others. “The South African government denied it, stating that it was not following a quota system. Government blamed Solidarity for the lack of progress due to the cases it brought before the courts and the complaints it lodged with the United Nations,” Hermann said.

Deputy Minister of Justice and Constitutional Development, John Jeffrey, had to field questions regarding the report he had submitted to the committee on behalf of the South African government the day before yesterday. The submission of the report followed after the presentation made to the UN Committee on Monday by Solidarity and AfriForum on the South African government’s policy on racial quotas in employment and in sport.

According to Hermann committee members took government to task for the late submission of its report and because it contained insufficient information.

“One of the committee member and a former judge at the Belgian Constitutional Court, Marc Bossuyt, yesterday said government’s affirmative action policy is rigid and its implementation in the private sector, the economy and in sport is absurd. The use of race comes down to old apartheid and is not in line with the Convention,” Hermann said.

Jeffreys, however, denied that government was following a quota system. He said a long way still lies ahead and that the slow pace is partly due to Solidarity’s resorting to the courts and the United Nations.

In response to the Minister, Bossuyt said that he could not perceive a difference between quotas and targets. Special measures should not take the shape of reverse racism. According to him, there is no such thing as “good racism” and special measures may not be implemented on the basis of skin colour. He believes the focus should be on schools as it will be more beneficial – albeit more challenging.

Another committee member said that quota systems are not good in the long run and that other policies should be considered.

In addition, committee members focused strongly on education. The committee’s rapporteur responsible for South Africa, Ms Dah, said that South Africa has a large education budget. Funding, therefore, is not a problem; the problem has to lie elsewhere.

“We find it ironic that the government regards Solidarity’s court cases as resistance. The government is irritated because the courts interfere in the implementation of its racial policy. The government does not want to be bound by legislation. The courts have found the South African government guilty on charges of unfair racial discrimination a number of times,” Hermann said.

“We are extremely pleased with our representations. Our presentation dominated the session to a large extent and sparked a fierce debate. Another voice was heard on an international platform. My impression of what took place at a UN committee this week, was that South Africa has lost its status as the world’s darling country,” Hermann said.