Teachers embark on virtual cycling tour to save jobs 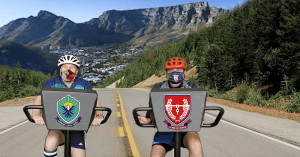 It is estimated that up to 150 000 teachers and other school staff are appointed by school governing bodies. These occupational orientated people, who fulfil various functions and roles at schools, play an extremely important role in pupils’ school careers as well as the optimal functioning of day-to-day activities and challenges that each school deals with like a well-oiled machine.

Solidarity and the Support Centre for Schools (SCS) recently established an Occupational Guild for Governing Body Teachers. Solidarity’s aim with this is to prevent thousands of governing body jobs to be cut, which includes the services of supporting staff such as therapists, sports coaches and administrative workers.

“If these jobs are cut, the country is headed for a crisis in education,” said Dr Dirk Hermann, CEO of Solidarity.

Almost every school in South Africa has staff that are not appointed by the Department of Education and whose salary is paid by the school itself. These staff’s salaries are paid by the school fund which the parents pay monthly. In some instances it is also funded by fundraising activities hosted annually by the schools with the hope that enough funds will be raised to appoint enough staff for the following year as the needs and larger number of children grows in the school.

In truth, these staff are dependent of each parent paying his or her child’s school fund – not only to earn an income, but also because no school can function without staff. The teacher putting in so much effort to try and teach your child in any possible way during this uncertain time might be one of the thousands of people who are uncertain about their future and who now relies on you.

Although many teachers are dependent on school funds to pay their salaries, two primary schools in Bloemfontein tackled an innovative project hoping to collect enough funds to save 32 governing body jobs at the schools, respectively. Approximately 30 teachers of Laerskool Bloemfontein and the Willem Postma Primary School will cycle 1 100 km on a stationary bike from Bloemfontein to the Cape on 21 August – figuratively speaking, but their legs will definitely feel the impact!

According to an article published on Netwerk24, this will not only serve as an attempt to save 32 jobs, but also to offer help to families in these school communities who suffers financial pressure due to the Covid-19 pandemic.

The salaries of teachers who are in governing body jobs have already been reduced for the past two months and the situation is getting worse with the schools being closed.

This project depends on people who sponsor the participants and they are looking for sponsors who can sponsor each kilometre of the virtual cycling tour because that will provide the necessary funds.

According to Benita van der Merwe, the marketing agent of Willem Postma, the teachers of the two schools will be divided into shifts and the teachers who participate will start cycling at 12:30 on 21 August.

She also mentioned, if someone sponsors 10c per kilometre, it is R110 per entry which automatically lets you qualify for the lucky draw. Every hour there will be a draw where after a lucky winner will be announced.

Van der Merwe said the event will be broadcasted live on DigiTV (https://digitv.co.za/#/) where people can watch from across the country. She also mentioned that companies who sponsor the event will enjoy publicity and recognition during the live broadcast on DigiTV.

Solidarity’s Occupational Guild for Governing Body Teachers are passionate about teaching and encourage our members and supporters to become involved. We also encourage other schools in the same position to tackle similar projects. Innovate ideas are the vaccine for schools and other enterprises to overcome this pandemic!