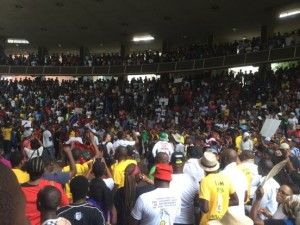 The trade union Solidarity is currently taking legal action to compel universities to ensure the appropriate protection of Solidarity’s members and other staff. This follows after staff and students had to endure extensive violence and vigilante behaviour on campuses over the past few days.

“Over the past few days, staff had to endure insults, threats and the physical violation of their person that often included being forced to leave lecture rooms. It is unacceptable that universities allow violent students to walk from classroom to classroom on campuses and do whatever they want,” said Solidarity Deputy General Johan Kruger.

Kruger said Solidarity was preparing an attorney’s letter warning the North-West University to protect its staff properly. Should the university fail to do so, Solidarity would take urgent steps to enforce the proper protection of staff members. “Universities should bring any student and non-student who disrupts classes, physically threatens staff and commits other forms of violence under immediate control and have to take appropriate steps against them. If the North-West University doesn’t do it of its own accord, we will force them to do so,” Kruger explained.

Apart from the letter sent to the NWU, Solidarity is also contemplating to direct letters to other universities where its members’ safety is not ensured. “We are engaging with our members at several universities and we reserve our rights,” Kruger said.

“Solidarity invites its members, other university staff members and students to report incidents of being threatened, insulted or being physically impaired to us,” Kruger said.

Farm murders: How does the government feel about it?