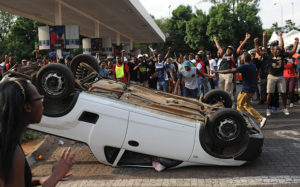 Damage to universities even more than the government claims

The trade union Solidarity urgently called on management at universities where there have been violent student protest actions in the last year, to take control of their campuses again. This follows inter alia, on the recent announcement by the Department of Education that since October 2015, the damage to university campuses by students during violent protests is estimated at R460 million.

Johan Botha, Deputy General Secretary of the Professional Sector at Solidarity, says the damages and losses universities endure because of the violent protest actions, is actually in reality more than what the government claims to be. “Due to the damage, universities will be forced to down-scale their main development projects and any expansion plans. In the long term, universities will therefore experience a loss in income and growth due to the aftermath of the destruction. The ultimate loss universities will experience is thus more than is currently estimated, “Botha warned.

Botha further stated that lecturers are exposed continuously to unfavourable working conditions which among others include lower salary increases. “There is even a possibility that universities will have to implement retrenchments in future due to the damages. Furthermore, universities’ research budgets may be cut and the careers of lecturers and academics at universities will be influenced by the situation,” Botha said.
“Apart from the damage to physical buildings and property, academic excellence and the broader university life in South Africa will suffer from the unrests on campuses because universities will probably be micro-managed by the government to a greater extent,” Botha added.

Botha and Solidarity continuously work to discuss this matter and other issues in their meetings with universities’ management. “Universities just cannot absorb more damages due to destruction and fires. They will have to act stricter and stronger against those who promote violence on campuses,” Botha concluded.