Victory for Paraplegic clerk against SAPS 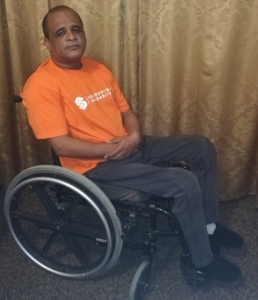 Gilbert Johannes (40) of Bredasdorp was an extremely competent sportsman at school before ending up in a wheelchair as a paraplegic following a head-on collision in 1994.

The bargaining council for the safety and security sector (SSSBC) recently found – in favour of Johannes – that the SAPS had to compensate Johannes with three months’ salary because he had unfairly been denied promotion to a higher post in the police.

“I am so grateful for what Solidarity has done and is still doing for me. I did not even think twice about where to go for assistance with my crisis and I now have experienced first-hand how strong and good Solidarity is as a trade union,” an excited Johannes said over the phone.

Johannes has been working at the Bredasdorp police station for the past 19 years, where he as a paraplegic is employed in an administrative post. “I have been working well and easily from the first day. I have always given my best and constantly equipped myself with the necessary knowledge and attended courses to be the best person in my post,” Johannes said.

He has been at post level 5 for the past 11 years. In February 2016 a supervisory post as Chief Administrative Clerk at post level 7 was advertised at the Bredasdorp police station, where Johannes is stationed. Johannes was one of six persons shortlisted for the post. But he did not get the post.

During arbitration it was found that only two of the top four candidates qualified for the post, because the other two did not meet the minimum requirements of four years at post level 5 and therefore had been shortlisted incorrectly.

The candidate eventually appointed to the post is a black woman of Tulbagh – 207 km from Bredasdorp. She has only matric and a basic registration course behind her name. In addition, she is one of the candidates who did not qualify to be shortlisted, having been at post level 5 for only almost three years, compared to the nine years of Johannes at that stage.

“I was heart-broken when I did not get the post and I decided this is where it has to stop. Such injustice simply cannot be tolerated! The fact that the court case took such a long time was very difficult for me, because for every appearance I had to drive 200 km to Cape Town and 200 km back home, but today I am grateful because we won and I believe this will also give other people in my position the courage to fight,” Johannes said.

The presiding officer of the panel responsible for the appointments admitted that the panel had made a great many mistakes and that the allocation of marks had not been consistent.

Johannes says he still feels he is the strongest person for the advertised post. “It has been wonderful to win, because I have proved a point. But to be honest, I still want to fight to be appointed to that post. I know with all my experience I am the strongest candidate for this post. This is not the end yet,” Johannes said.