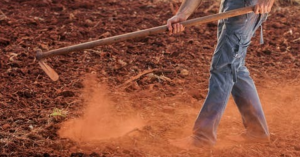 There is no clear definition for regenerative agriculture, but it can be described as a farming method where steps are taken to reduce or recover losses, which include nutrients and greenhouse gasses.

It is similar to conservation farming in that it combines the use of stubble retention, crop rotation and minimum soil disturbance to promote soil health. However, it is on a higher level than ordinary conservation farming since it includes the incorporation of cover crops, compost tea, compost and manure to avoid synthetic fertilisers, pesticides and genetically modified organisms (GMO’s).

The purpose of revival farming is to essentially imitate nature rather than work against it. It is based on the understanding that soil is a living, dynamic eco system and not only a growth medium.

According to Prof Buz Kloot, of the University of South Carolina in the USA, regenerative farming is based on a “soil health mindset”, which is about “thinking more about what you do and where you go with your agricultural production practices.”

It’s all about the soil

Soil has an extraordinary ability to store carbon and can be the key to climate-sustainable agriculture. There are more than three times as much carbon in the world’s soil than in the atmosphere and scientists believe that agricultural land will be able to absorb even more carbon when better management practices are implemented.

Plants absorb carbon from the atmosphere through photosynthesis and absorbs it through their root system in the ground. More carbon is stored by the organic material as well as the micro-organisms in the ground. However, to be able to absorb carbon, the soil must be alive and healthy.

For decades, the usual practice for farmers has been to plough their field, sprinkle them with fertilisers and then spraying it with herbicide. Because of all the inputs, the ground has started taking up less carbon and, in some cases also started losing carbon.

What is important? What we eat or how we farm?

Across the globe people are discussing alternative food sources. From insects to plant-based foods. These discussions are bases on the concerns regarding climate change. However, there is another revolution taking place. This revolution is busy taking over the agricultural world and changing everything for the better.

Danie Slabbert farms just outside Reitz in the Free State. He farms, among other things with 500 Drakensbergers and spotted Nguni cattle as well as mealies.

Danie says that they are merely trying to imitate nature. He refers to animals and their migrations patters of 200 years ago.

Big parts of South Africa consist out of grasslands. These grasslands previously served as feed for millions of migrating bucks. According to Danie, the bucks became less because they were shot and therefore many of the plains became wheat and potato lands.

Since there are many grasslands left, Danie imitates nature to recreate the natural cycle.

The ecologist Allan Savory made a controversial statement. Savory’s theory argues that everything we know about maintaining natural landscapes is wrong.

He argues that instead of being afraid for overgrazing and to take livestock off from the land to have it rest, most pastures should add more livestock because their movement and waste as well as their lounging about while grazing, stimulates grasses to grow. If grasslands recover themselves, they will absorb carbon and thus increasing the density of cattle and other livestock not only increases the carbon in the environment, but it also protects it against climate change.

That is also precisely what Slabbert did on his farm. He has rejuvenated the land by drastically increasing his herd. He places his animals in a rectangular grassland with a low wire fence. They graze there for many hours before the fence is lifted and then the herd can move to the next section.

In this way they are always on the move and they do not eat selectively, just like a migrating herd. This method is known as ultra-high-density grazing and according to Slabbert the cattle supplements the land.

Many climatologists follow the conventional thinking that livestock is bad for the environment or climate change. According to some statistics, cattle contributes to around 14% of worldwide emissions. According to researchers at UC Davis, the University of California, one cow produces about 220 pounds (approximately 100 kg) methane per year. If one follows this approach, it is certain that many greenhouse gases are released into the atmosphere each year.

Researchers at the Texas A&M University led by Professor Richard Teague found that even moderately efficient grazing systems put more carbon into the soil than what livestock emits.

Beneath the mantle of progress

Why would farmers then continue to utilise chemical substances even if there are proof that it is not sustainable?

The majority of studies, however, shows that to plough, use fertilizer as well as the use of chemical pesticides on the ground and crops, can hamper the long-term health of ground.

According to Art Cullen, a journalist who spent his career in Iowa in the agricultural community, there is also little incentive in companies and among farmers to exercise revival agriculture that will limit the use of chemicals.

He also mentioned that farmers in the USA are subsidised by government to plant more wheat and other crops than the market requires. However, in South Africa there is little to less subsidising from the government and farmers are left to use their own initiative.

According to Cullen, farmers can be paid more to absorb carbon in the ground by giving them a dollar more to plant grass. He mentioned that farmers will rise to the opportunity if it is financially rewarding.

However, in South Africa farmers will see bigger profit since they would have to obtain less additional feeding because the field will offer enough grazing through the natural growth of grasslands without hem having to spend additional funds, due to the fact that their herds are responsible for less expenses. This extra profit can also be used to get more livestock.

This is also not a process that needs to happen overnight, and farmers can gradually switch over to this method.

Farmers are experts in their field and there is no one else that knows their land as well as them. The question is though whether financial incentive that is only rewarding on the short-term will continue and whether the farmers will be willing to win back the balance so that nature can do its job. Nature can fight climate change in its own way and rebalance between humans and nature and in this way still provide for rich soil and a rich future.