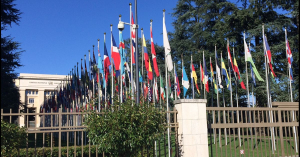 For this purpose, all member countries must submit reports to the committee every two years following which the committee makes recommendations to countries to address certain issues. The committee also makes provision for civil society to submit shadow reports as governments cannot always be trusted to submit their reports. Other ways in which civil society can become involved with CERD is through the establishment of early warning systems, urgent procedures and by way of individual complaints. Solidarity will file such a complaint later this year.

We are returning to CERD this year with a complaint, demonstrating to the committee that the government has not yet complied with CERD’s demands. This is particularly important in light of the government’s commitment to granting aid on the basis of race and this in the midst of the Covid-19 pandemic.

CERD is a recognised human rights body that reports directly to the UN. South Africa is a signatory of ICERD and therefore the government is obliged in terms of section 231 of the South African Constitution to comply with the demands of such conventions. In fact, section  231(4) of the Constitution provides for the following:

The involvement and zeal of our civil society are required to put pressure on the government so that it has to relinquish its harmful and unethical behaviour. That is why we call on the support of the international community to condemn the government’s violation of human rights.

We must be able to break the ANC’s narrative when they state that they represent the will of South Africans. We must make it clear that the government is playing ideological games with the lives of our citizens.

We have to do it because it is the right thing to do and that is the only way in which we can force the government to stop judging people on the basis of race instead of merit.

The Covid-19 pandemic is not a crisis that only affects some people; it affects the whole of South Africa. All businesses are being hit hard, but unlike the virus, the government is going to discriminate against people on the basis of their skin colour.

We have been aware of the ANC’s dreadful racial ideology. This response to the pandemic is but the latest –and crudest example of it. When we say no, we are not only saying no to these race-based packages. We are saying no to the government’s racism.

Solidarity is taking a stand and we are heading to the highest authorities in the world to lodge a complaint accusing the South African government with the highest authorities in the world. The South African government ignores the norms, values and rights of citizens, rights that are internationally recognised as universal human rights. Our only resort is to lodge a complaint with the UN’s CERD committee. With this we want to force the government to treat races equally. This complaint does not demand anything special, strange or excessive – Solidarity’s complaint is only demanding normal race relations. We simply demand equality before the law.

We are saying no for the sake of those who have been left behind because of their skin colour. We are saying no to discrimination. We say no because it is our duty to do so.